New to our catalog this week: Kate Schapira’s full-length book HANDBOOK FOR HANDS THAT ALTER AS WE HOLD THEM OUT and Cassandra de Alba’s chapbook habitats. 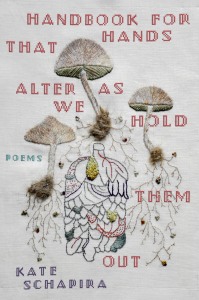 Cassandra de Alba’s work has appeared in Tinderbox, Illuminati Girl Gang, Ilk, Drunk in a Midnight Choir, and Best Indie Lit New England, among other publications. She graduated from Hampshire College with a degree in poetry and history and holds a dual masters in history and archival science from Simmons College. A three-time National Poetry Slam competitor and associated editor for Pizza Pi Press, she lives in Medford, MA.

Kate Schapira  is the author of four other books of poetry: The Soft Place (also with Horse Less Press), How We Saved the City (Stockport Flats), The Bounty: Four Addresses (Noemi Press) and TOWN (Factory School/Heretical Texts). Her 11th chapbook, Someone Is Here, appeared in 2015 from Projective Industries. She lives in Providence, RI, where she teaches at Brown University and for Frequency Writers, runs the Publicly Complex Reading Series, and sometimes offers Climate Anxiety Counseling.

Of Schapira’s Handbook for Hands…, Lo Kwa Mei-En writes, “What have I given in the service of systemic denial? And what strange growth might I undergo if I choose to maintain, instead, an awareness of reality, with its fractured, fractal manifestations like spores in every mouthful of breath, of food, of outcry? “Have we seen us?” These are some of the questions Kate Schapira asks with Handbook for Hands That Alter As We Hold Them Out, a collection of poems whose speakers alternately call us towards the dream witch city (a poetic system of grief and resistance) and instruct us to confront and name the plastic-woven roots amassed beneath the throbbing spread of human civilization. Schapira’s poems insistently reflect the terms of power back to the sky, back to the dead—who demand of us, “While you have them, adjust your eyes”—back to the reader, with angular, physical verse that builds up a cerebral, critical mass of conflict and feeling. This book situated me as a reader in the nexus of “feeling like something living off light and death, not life” and “growing the moment.” I am grateful for how these poems inhabit strange, new ways of being in a painfully familiar world.”

You can order Kate Schapira’s Handbook for Hands That Alter As We Hold Them Out for $15,

and you can order Cassandra de Alba’s chapbook habitats for $8.