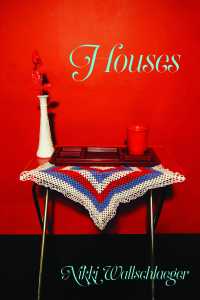 We can give you a little peek of the cover design for Nikki Wallschlaeger’s book HOUSES, photo and cover design by Nikki and Brian Wallschlaeger. Horse Less Press is so excited about this book. Some other people are excited too (see below). Did you know you can pre-order a copy for only $14 and free shipping? Do it now!

“In my father’s house are many mansions,” Jesus promised. In her deftly-aimed, disarmingly poised debut, Nikki Wallschlaeger leads us phrase by phrase through the many dim and brightly lit houses of our American psyche in this pitiless new century: “Hospitals. Lighted for end times. They run on glossy generators & backup generators, lights of all dreams.” Her long lines push the phrases into tight proximities which are sometimes painful, sometimes grate up a little spark: “Neighbor, our hearts pumped blood in the same room, looking onto lakes that teenagers drown in.” I admire the grave persistence of her vision, the precision of her eye and ear. Houses unflinchingly reports the extremity of contemporary existence and presents the “end times” as durational, as just something else to endure. “The bill, they say, is going through the house. Eventually we’ll have to get real.”    -Joyelle McSweeney

Nikki Wallschlaeger is not afraid to watch the furniture break down like a body and then come together against a brick wall, someone or something pounding on the other side.  If origin is a myth, it is also endless practice:  “There’s always a big knife in the kitchen.”  “We’re using the past instead of letting it use us.”  As white civilization drags its history of ruin and pillage into the 21st century, Houses rebuilds ancestry as force rather than simply loss, wielding the eye of vulnerability buried inside each scar through a face-off with the present:  “They’re vague about what they want with their violence so I shot them.”  This is not a book you will supervise.  This is a book whose supervision pierces the mundane and extraordinary, transforming dispossession into wanderlust, mending the spell of ill inheritance.  -Lucas de Lima

Nikki Wallschlaeger’s Houses inhabits an eerie city of houses singing their displaced memories, their sprawling histories. This is a new world poetry pushing us to witness words peeled down to their own arrangements, to peer underneath the bandaged skins of our neighbors, to survive the wreckage of a monotonous and violent economy.   -Ching-In Chen