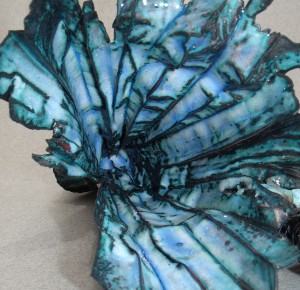 Holding China Cowboy, the black silhouette of cowboy torturer against vivid yellow – China Cowboy ‘yellow’ – the haunted vortex of your novella hurls itself at me from the get-go.  Who is that small bound child, a tethered collapse, at whip’s end?   –In the opening passages, I find her, no collapse but a fierce resistance: twelve year old La La who promises to “whoop her way out” of the perdition family and abductor inflict upon her.

I am stunned by your La La, in love with your La La, child of Hong Kong’s underbelly dreaming of fame as a country balladeer, a new Patsy Cline/Patsy Clone: “I’m just some lipstick, some powder on my face.” Your Lala compels me with a fierce poignancy that refuses the book cover’s prophesied collapse.  La La’s not giving up, she getting to Nashville and the country charts, come hell or high water.  Though she’s got plenty of both.  China Cowboy pulls me deep into “the belly of Hell,” a genre- and voice-switching push-and-pull that La La with her indomitable will refuses to give way to.  Ren, her abductor, sodomizes, drugs, lashes her, makes her bleed and makes her ill; her mother can’t, won’t love her until she is gone, long gone; “Baba” only had time to pimp her, use her, a foil for his thieving.  La La may be victimized, but she never submits, not even after “Bill” has put his boot to her skull.  I want every child to own such unyielding puissance; I want it for me, too.

This La La, this unconquerable life force who sings, wails, hollers her blues, even though her mama tells her “COWGIRLS DON’T HAVE FLAT FACES.” Says who?  Wailing her country-tune sorrows against rapist/mother/baba, she demands and has the last word.  Her lyrics from “the other side of life” are a scalding innocence that was never naïve – “I no longer sing. I unsing.  This is my country superstar humility, I point to it, under the under. I’m splayed, can you shout me? I’m hushed, can you hear me?”  La La, unflinching, determined, true. When her abductor, Ren speaks of La La’s singing practice, I hear her screams instead.  Still he jumps to it when she wants American cereal for breakfast. And your word-play forming her voice, pitch-perfect.

Dancing me around with your Patsy Clone, new girl, new woman, singing a lost blues, you spin me around, waltz me through the horror-schtick of “La La and Ren”, your honky-tonk word-play and terror swinging me wildly into La La’s vanished arms.  I am vanquished, swept away by the your new Emily Lou, even in the midst of my horror, your horror, that nightmare world from which La La has sprung.

Marthe Reed writes: The epistolary — the literary letter — has always stuck me as a letter into the void, to a person who will or can never read the letter.  Rather like the futility of writing to my representative in Congress.  This letter however, to Kim Gek Lin Short, a writer I have never met, is another animal entirely. A bridging of gaps, absence, desire: “Dear Kim.”  “Dear Kim. Your language sticks to me, adheres in transparent sheets, paper-in-the-rain, soaking through my skin.” Dear reader, dear writer.  What do you hear? Were you always there, listening through the wall, or the page? What would you say?